President’s Enforcement Decision on Washers is a Win for U.S. Manufacturing Jobs 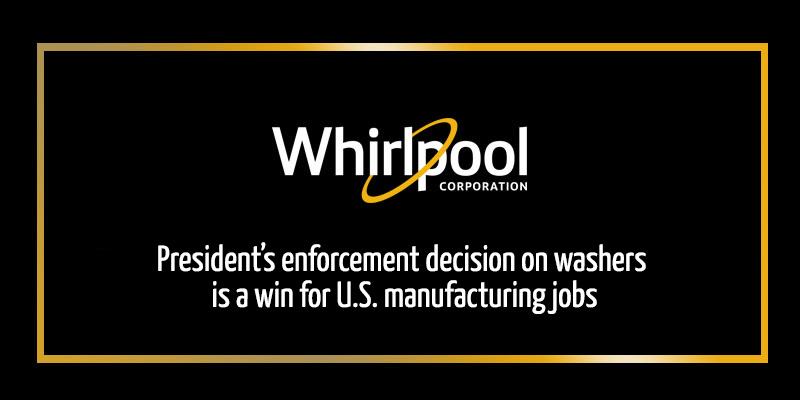 Today Whirlpool Corporation Chairman, Jeff M. Fettig praised the Trump Administration’s decision to uphold long-standing trade rules by establishing a tariff of up to the legal maximum of 50 percent on imports of large residential washing machines. The administration announced this remedy to address Samsung and LG’s decade-long efforts to unlawfully dump washers and circumvent U.S. law.

“This announcement caps nearly a decade of litigation and will result in new manufacturing jobs in Ohio, Kentucky, South Carolina and Tennessee,” Fettig said. “This is a victory for American workers and consumers alike. By enforcing our existing trade laws, President Trump has ensured American workers will compete on a level playing field with their foreign counterparts, enabled new manufacturing jobs here in America and will usher in a new era of innovation for consumers everywhere.”

Whirlpool Corp. added 200 new full-time positions at its manufacturing plant in Clyde, Ohio, in anticipation of increased demand following a safeguard remedy decision. The new hires are just the beginning of increased investments in innovation, manufacturing and additional manufacturing jobs for Whirlpool and its vendors.

“We want to thank the president, the U.S. Trade Representative, the Office of Trade and Manufacturing Policy, the International Trade Commission and members of Congress for putting American workers first.” Fettig continued. “We also want to thank our passionate, hard-working employees for producing the highest quality, most innovative washing machines in the world. We pursued these trade cases for them, and we hope today’s announcement finally reestablishes real competition.”

The president will implement a tariff rate quota effective for three years that covers finished large residential washers and key washer parts imported from all countries, including South Korea. Additional details are available on the USTR’s website (https://ustr.gov/about-us/policy-offices/press-office/press-releases/2018/january/president-trump-approves-relief-us).

Today’s announcement from the White House is the culmination of litigation that began in 2011, when Whirlpool filed its first anti-dumping petition with the U.S. International Trade Commission (ITC). The ITC voted unanimously in all three cases brought by Whirlpool that imports by Samsung and LG injured American workers and manufacturers.

Whirlpool Corp. Additional Information
Certain statements in this press release relating to the safeguard petition and the expected benefits to the company constitute “forward-looking statements” within the meaning of the federal securities laws. These statements reflect management’s current expectations regarding future events and speak only as of the date of this press release. Forward-looking statements involve significant risks and uncertainties, should not be read as guarantees of future performance and will not necessarily be accurate indications of whether or not, or the times at or by which, events will occur. Actual performance may differ materially from that expressed or implied in such statements. Important factors that could cause actual results to differ materially from these expectations include, among other things, the risk that we may not realize expected benefits following resolution of our petition. In addition to these risks, reference should also be made to the factors discussed under “Risk Factors” in Whirlpool Corporation’s periodic filings with the Securities and Exchange Commission. Although the forward-looking statements contained in this press release are based upon what are believed to be reasonable assumptions, investors cannot be assured that actual results will be consistent with these forward-looking statements, and the differences may be material. These forward-looking statements are made as of the date of this press release and, except as expressly required by applicable law, Whirlpool Corporation assumes no obligation to update or revise them to reflect new events or circumstances.