Whirlpool’s Young Professionals Attend TED Talk for a Good Cause 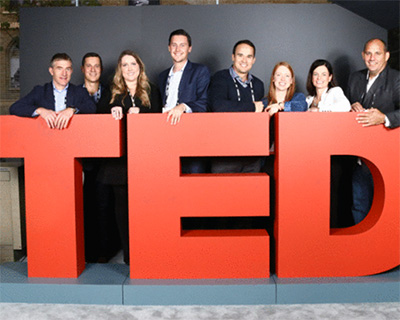 Whirlpool’s Young Professional (YP!) employee resource group combines charitable contributions and  unique learning opportunities for its members. In October, the organization hosted its annual United Way Leadership Auction, which donates all proceeds to our local United Way. Whirlpool’s senior leaders auction off experiences with themselves, such as wine tastings, mentoring sessions, and (this year) a trip to Whirlpool manufacturing plants in Mexico, as well as a trip to attend a TED Talk. The 2016 auction raised over $12,000 dollars. With various matching donations, the amount translated to over $60,000–a win for young professionals, the community, and Whirlpool alike.

This year, NAR CIO Matt Meier auctioned several events, including the chance to attend a TED Talk at IBM in San Francisco. TED, which stands for Technology, Entertainment, and Design, is a nonprofit “devoted to spreading ideas, usually in the form of short, powerful talks.” Four YP! members (Ryan Cody, Mackenzie O’Hara, Emily Vasington, and Jason Blosser) won the auction and attended the annual TED@IBM event in November.

Speakers included cancer researchers, organizational psychologists, spoken word artists, and a nano architect; their talks focused on the intersection of humanity and technology, with a theme called “spark.” Presentations were interspersed with related videos, musical performances, and Q&A with the director of an upcoming film, Hidden Figures, about the influence of three black female mathematicians who worked at NASA in the 1960s.

Whirlpool’s YP! attendees had the opportunity to talk with the speakers after the event and Ryan Cody had this to say about the experience:  “It was a win-win scenario for all of us involved. We supported United Way, witnessed an amazing TED Talk, and had the chance to engage with senior leadership from Whirlpool and IBM.”

He also mentioned how impactful it was to form new relationships with other young professionals that work across the company, all while taking in some of the famous sites in San Francisco.  His advice to other Whirlpool young professionals? “Visit the YP! auction next year for your chance at an experience like this!”

Click here to learn more about this TED event.