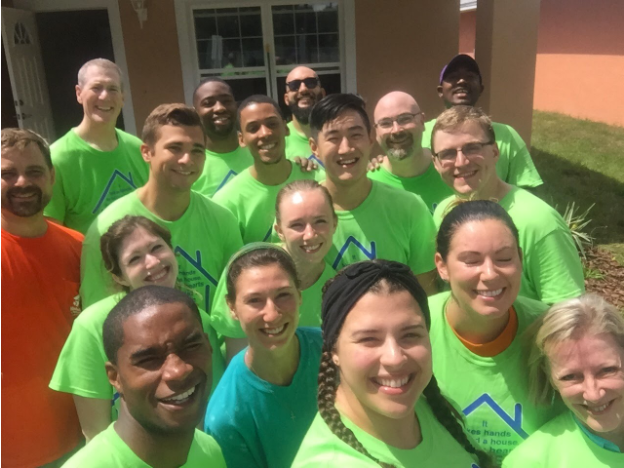 Tampa – Every year one deserving NAR Sales region is granted the company’s highest honor as the recipients of the Winner’s Circle Award. This year the Southeast Coast region and other Sales Execution Leadership traveled to the Tampa Bay, for a week in St. Petersburg, Florida.

Representing Whirlpool Corporation as volunteer lead in our partnership with Habitat of Pinellas County, I saw this gathering as an ideal opportunity to bring Whirlpool employees together for a good cause. Fifteen Whirlpool employees from Florida, Michigan, North and South Carolina participated in the build. Despite occasional rainfall and waves of Florida heat, we told stories, laughed and joked. Coming together for the build not only built comradery, but the Kabama-Kabuya’s family story inspired many of my coworkers to get involved in their respective cities.

Felly, Mamie and their six children experienced difficult living arrangements when they first moved to America five years ago from Condo. Since then, their living situation had not improved much.

Hoping for a larger place to live for their family, Felly and Mamie put their names on a waiting list for low income housing. With the help of Lutheran Services, the Kabamba-Kabuya family found a small three-bedroom, one bathroom apartment where their four girls share one bedroom and their two boys share another bedroom. 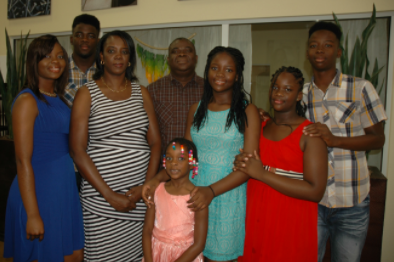 Besides sharing bedrooms, the family of eight shares one bathroom, which sometimes causes the children to miss the school bus or makes Felly and Mamie late for work.

The family’s limited income left Felly and Mamie with few options. It was not until Lutheran Services told the family about Habitat for Humanity’s homeownership program that they saw a glimpse of hope for their future.

The family decided to apply for the Habitat program and later learned that they were accepted.

They were excited that their housing expenses will no longer exceed thirty percent of their income. Their more affordable monthly mortgage payment will help ease the family’s financial burden. Felly and Mamie are also looking forward to having a spacious place to call home, and providing a stable home for their children to grow up in.

In addition to organizing the Habitat Build, I was asked to give a formal speech and present the keys to the Family at the House Dedication on World Habitat Day October, 3rd. With community leaders, government officials, and members of Habitat in attendance, I spoke about Whirlpool Corporation’s 17 year long partnership with Habitat for Humanity.

Just as I expressed at the dedication, it is truly an honor to contribute to something that goes beyond your own personal wants and needs. Despite our difference as a people, we all desire much of the same things. No matter our race, where we come from, or how much money we make, we want a place to call home. We want a place of security, a place to rest after a long day of work, and place to raise our children. Communicating the message that everyone deserves the opportunity for a better future, and a decent place to live can remove barriers of opportunity, health and success that might be apart of a family’s life for years. The importance of a home is what brings us together, and it’s what has allowed Whirlpool to exist for over 100 years.

This was the second Habitat home we have completed with Habitat of Pinellas County this year, and the first one I’ve volunteered for since joining Whirlpool. I hope this story aspire those reading to get involved in your local communities. Whirlpool is the global leader in our industry, but I believe it’s important that we also maintain leadership through social responsibility.

Whirlpool Corporation partnered with Habitat for Humanity 17 years ago and has developed active relationships with local Habitat chapters in more than 45 countries and contributed nearly $90 million in products and donations to Habitat’s work, building and embarking on new initiatives in partnership with homeowners. In the United States and Canada, the company has donated more than 175,000 ranges and refrigerators to new Habitat homes, serving more than 87,000 families.