Another win against Samsung & LG

U.S. Government agrees that Samsung and LG dumped washers into the United States 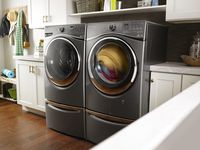 Today we achieved an important victory in our efforts to stop Samsung and LG’s serial dumping practices. The U.S. Department of Commerce (DOC) issued a preliminary antidumping ruling confirming that Samsung and LG are engaging in ongoing, unlawful dumping of clothes washers into the United States.

As a result of today’s DOC ruling, Samsung and LG are required to pay preliminary antidumping duties in the form of cash deposits on clothes washers exported to the U.S. from their production facilities in China:
Samsung     111.09 percent rate
LG                49.88 percent rate

With the fines in place, the Commerce Department will continue its investigation and seek further information from the companies being investigated. Final antidumping determinations establishing final margins are expected in December 2016.