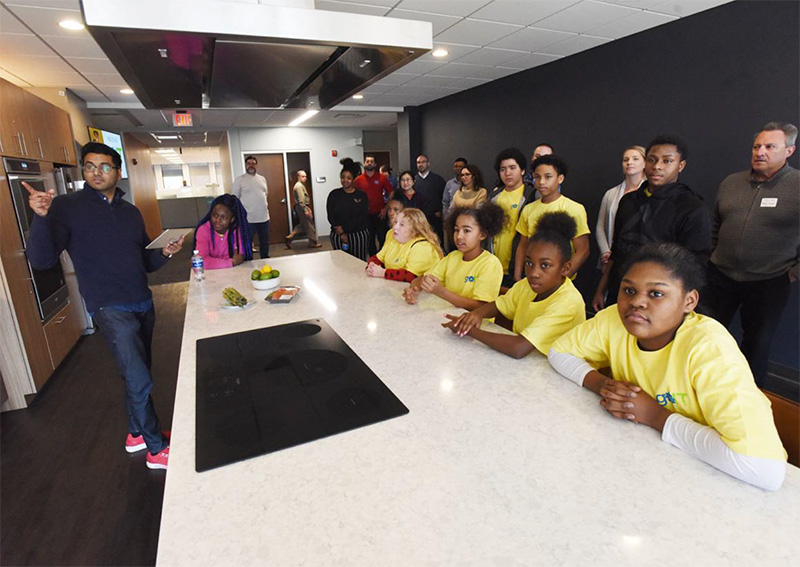 Jason Mathew, left, General Manager, Global IoT at Whirlpool Corp., on Tuesday shows students from the Arts & Communications Academy how some of the company’s new apps work in the kitchen during a tour of the Whirlpool Research and Engineering building. Photo by Don Campbell / HP Staff

Creating a mobile app from scratch is no easy task.

And yet, about a dozen students from the Arts & Communications Academy, Benton Harbor’s middle school, did so Tuesday as part of a friendly computer science competition.

Hosted at Whirlpool Corp.’s Research and Development building in Benton Township, students revealed the culmination of months of work that began when they were introduced to the goIT program in October.

Antonio Fominaya, a solutions architect for Whirlpool, said the program is meant to remove a level of trepidation for students about getting into STEM (Science, Technology, Engineering, Math) professions.

“We worked with kids over several months to help them build an app that they themselves conceptualized, designed and eventually built,” Fominaya said. “These apps help the kids realize that technology isn’t scary and helps to bring them into the mindset that they can do anything they want.”

The program is a byproduct of Tata Consultancy Services (TCS), a company based out of India with a large footprint in the U.S.

Students start with basic concepts on what computer science is before moving on to understanding design thinking. After identifying a problem in the community, students are tasked with creating a mobile app to address the issue.