Brianna Drew – Her One Step Story 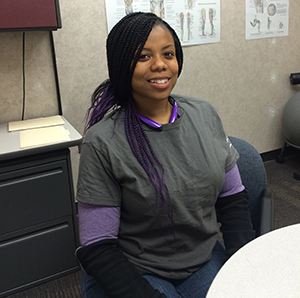 I stopped saying “no, I can’t” and started saying “yes, I can”.  I became a person who was ready to start living instead of just existing.

I was basically going through the motions and letting my day run me instead of me running it. Honestly, those everyday motions were centered around food.  I would go to the vending machine for peanut M&Ms at least 3 times a day and then have a lunch which almost always included fried foods. The worst part was justifying the idea that all the walking I did as a job requirement cancelled out my poor food choices.

2014 was my last year in my 20s and since I am not married and have not had children I honestly said ‘I’m ready for a change, if I can’t be a sexy mother then I’m going to be a real sexy auntie!”.

One day my friend texted me a picture of a nutrition plan which was pretty confusing. I talked to another co worker about the text and she suggested we go see the health coach that works here. I was a little reluctant but we went anyway. That was the beginning of my journey.

The process was really difficult at first. I needed to say no to poor choices and set boundaries for myself and others. The biggest hurdle was making time for the good choices like preparing meals and working out. Ultimately I realized that getting healthy is not only a light bulb moment of inspiration, it’s not only meeting with a health professional either…it’s a time commitment. That said, the most significant key moment was truly accepting this was going to require my time and attention day after day.

I started meeting with the Whirlpool health coach in January of 2014. At first I had convinced myself that this was a waste of time because I didn’t think a male coach could help but that quickly passed. He set up weekly meetings where we discussed what was and wasn’t working. This approach was simple but effective, helping me stay accountable along the way. Later I got involved in the Wellness Champion Network which included other employees with a similar passion for living a healthy lifestyle and promoting health.

Through this, my friends, family and co-workers have been my biggest supporters, sending me encouraging messages and helping me with food choices. My boyfriend even bought me a great pair of workout shoes.  The Whirlpool community has also been a huge help, including the pharmacist here, our HR leader, and the Whirlpool Wellness network.

As of today I have lost 75 pounds, gained a ton of friends through my fitness groups, my energy is higher than ever before, my confidence is night and day different than before and overall my life is so different after making these much needed changes. Although I do have aspirations and goals in the future, I work hard not to focus solely on those at the expense of the moment. In a weird way I refocus each day and ask, ‘what can I do to make myself better today? I will continue to share my story with others and hope they are inspired to make a change for the better.

The very first thing I would recommend to others seeking to change their health for the better is to start being honest with themselves. Second, I would strongly recommend building a solid support network. Last, it’s important to realize getting healthier is more like running a marathon than a sprint. It takes time.