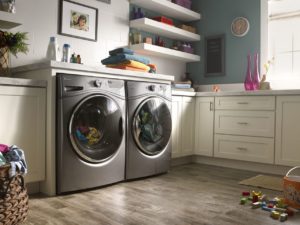 Today the U.S. International Trade Commission unanimously ruled that Samsung and LG caused injury to the U.S. appliance industry by selling their China-produced washing machines in the U.S. for less than they cost to make. Whirlpool Corporation reports that this vote is the final step in the government’s investigation it initiated in December 2015. Whirlpool filed the case to help ensure free trade so U.S. manufacturers can continue to create jobs, invest in new facilities and undertake research to drive innovation.

Today’s vote follows a U.S. Department of Commerce ruling last month that Samsung and LG violated U.S. and international trade laws by dumping clothes washers from China into the United States. Samsung and LG now must pay antidumping duties at the substantial rates set by the DOC ─ margins of 52.51 percent for Samsung and 32.12 percent for LG.

“This is a gratifying win for American manufacturing, particularly our more than 3,000 employees at our factory in Clyde, Ohio, who make clothes washers for American consumers,” said Jeff Fettig, chairman and chief executive officer of Whirlpool Corp. “The government made the right decision today, affirming that Samsung and LG’s long-term pattern of serial dumping injures American appliance manufacturers and threatens U.S. jobs. By enforcing and applying trade remedies that help ensure fair competition, the government supports a solid U.S. manufacturing base and continued investments in innovation that improve the lives of consumers.”

This ruling comes just four years after the government found Samsung and LG guilty of dumping washers from factories in Korea and Mexico. Following that 2013 ruling, the companies moved their washer production to China in an effort to circumvent the orders.