How to make a Maytag Man

An icon can be a number of things–it’s a widely known symbol, it’s a person who is very successful and admired, it’s a religious image, it’s a tiny picture on your computer representing a program or function. In regards to the Maytag Repairman, at the time Whirlpool Corporation purchased Maytag, the Maytag Man campaign was the longest running campaign on television featuring a real-life character and actually still holds the record today. Sure, different actors had played him over the years but since 1958, a bored repairman was a symbol of the dependability of the Maytag brand.

When you start talking about changing, not refreshing, but really drastically changing an icon, it’s kind of a big deal. I recently sat down with former Maytag Brand Manager Allison Gillespie to talk about the Maytag team’s journey and find out how it all began.

Let’s rewind to November 2012. Whirlpool Corp.’s ownership of Maytag was six years old at the time and it was clear there was a need to “put the Maytag back in Maytag.”

Both the product and the image needed revamping.  On the product side, more heavy-duty materials were used in construction of a number of products and a 10-year limited parts warranty was added.

With an updated  line of appliances, the brand sought to connect with consumers in a new and inspiring way. You might think of Maytag as your grandma’s brand.  Yes, the legacy of quality and dependability needed to be restored, but that’s not to say that the new brand couldn’t be…dare we say…exciting.

This is not a refresh or a reimagining or a “re” anything–this is a brand spankin’ new Maytag Man.  “It was a calculated risk. You’re taking the biggest asset, something that’s been out there for 50+ years and changing it” shared Gillespie.

The more we chatted about how the new Maytag Man was born, the more it sounded like a bit of a math problem or a recipe.  Add up the qualities of the appliances divided by the various aspects of the man himself and you get something that looks a little bit like:

Bake at 375 degrees for 45 minutes and then let cool before serving. Bon apetit!

Now, the Maytag Man IS the appliance, embodying those same characteristics of durability, power, and dependability that consumers look for in the products. Gillespie shared that the team had all sorts of scenarios and plans for how to educate the general public about the new concept but in the end, it wasn’t needed. The public didn’t just “get it,” they LOVED it!

@TheMaytagMan Is it weird I’m in love with the #maytagman? It’s hard to find a man that cooks, does the dishes & can keep things cool!

Just search #MaytagMan on Twitter and it’s easy to see that he’s made a big impression.

Sure, some of the ads are polarizing; dads drink milk straight from the jug, utensils get licked (sometimes by dogs, sometimes by humans) before going into the dishwasher…some people love it and others are apparently germaphobes. For most people though, it’s relatable. It’s the comedy of real life perfectly portrayed with a deadpan delivery from a man representing a machine. 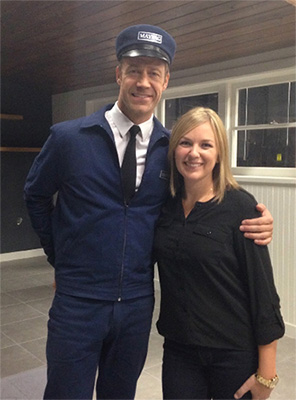 It’s very clear in talking to Allison about the team who worked on this massive brand journey that it’s a huge source of pride. It was also a unique professional opportunity. “You’re part of changing history–taking an icon of American TV and doing something bold and being open-minded and getting others to embrace change” she says. How many people get to say that?

It’s also especially personal for Allison who had recently found out she was pregnant just before leaving for the first commercial shoot for the new ad campaign. As she puts it, “it was an eventful year, bringing two very special people into the world, my son and the Maytag Man…they’re both my babies.”

To top it all off, it was the date of her son’s first birthday when the new advertising campaign won big at the 47th annual Effie Awards. Global marketing and technology agency, DigitasLBi, the creative minds behind the new Maytag Man, took home a Gold Effie in the Renaissance category as “The Comeback Story of a Brand Icon” and a Silver Effie in the Home Furnishings & Appliances category as “Comeback of an Iconic American Brand.”