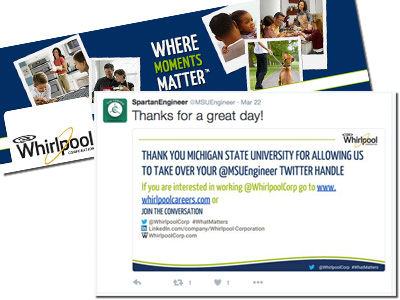 A group of Whirlpool Corp. employees spent their Tuesday lunch hour reaching out to college students through social media.

Inside a second-floor conference room at Whirlpool’s Riverview Campus – often referred to as “The Fishbowl” – five Michigan State University alumni took over one of their alma mater’s Twitter handles.
Whirlpool’s takeover of the MSU engineering department’s Twitter account lasted 12 hours, from 9 a.m. to 9 p.m.

Kathleen Wolf, senior manager of corporate reputation and interactive media, said she has done a Twitter chat through Whirlpool’s account before, but never something like this.

Wolf said the benefit of doing this “Twitter takeover” was letting others know what it’s like to work at the Benton Harbor company.

Inside the conference room, Wolf had a flat-screen television showing all tweets mentioning Whirlpool worldwide. This allowed the handful of engineers to respond using the @MSUEngineer account.

Chelsea Davis, a sourcing specialist, said she used to follow the @MSUEngineer account when she was a Spartan and on the job hunt.

“A lot of times they would post job openings or career events they were having on campus,” Davis said. “I used that to know what was going in with the college of engineering.”