One Step at a Time for Jeff Madden 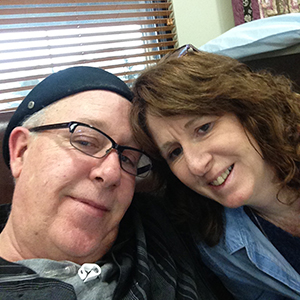 I was told I had six months to a year to live. More than a year ago.

I had always been a pillar of health. I always stayed active and for the most part also had a healthy diet. I had never had a broken bone, stitches, no real sickness other than the common cold.

In early April of 2015, I had a severe pain in my side. So we went to the emergency room. An ultrasound revealed an abnormality in my liver. So they did an MRI. My wife and mom were with me. The doctor came in and said you have stage four cancer and 80 percent of  your liver is involved.

Over the month that followed, I underwent numerous tests. I was told I had six months to a year to live. A few weeks later I was notified that the cancer started in my prostate and metastasized to the liver. The doctors said that the prognosis was actually somewhat better.

I  have been getting treatment over the past year and I started chemo six weeks ago. I have continued to work and have had support from leadership and my team.

I have learned through this experience that even if you’re healthy for 54 years, it pays to have regular checkups and testing. If I had done so, my cancer would have been detected much earlier.

None of us knows how long we will live. We could live to 100 years old. We could get hit by a semi tomorrow. We could be diagnosed with a severe illness. And while eating right and exercise are extremely important, preventative care and regular testing and screenings are also critical components to wellness.

I could live a few months or for years. I never give up. I have an incredible family and support system. My story is meant to be one of inspiration, not sadness.

Hold those dear to you everyday and live life to the fullest.