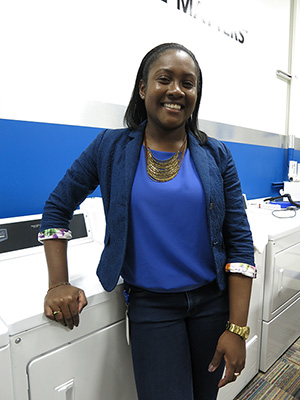 At just twenty-seven years old, this San Fernando born-and-bred young lady is making waves internationally. Sherrette Yeates is the person that ensures Whirlpool Corporation’s commercial laundry products meet the regulations for global markets. If you see a commerical washer and dryer with the Maytag or Whirlpool logo, Sherrette worked on it!

Strangely enough, when you meet her, what jumps out at you is her sincere, calm, gentle demeanor. Nothing about her shouts technical.  Yet what she does sounds exactly like that; Project Engineer, leading the codes approval team for Commercial Laundry. “I lead the team responsible for ensuring all commercial washers and dryers meet the technical regulatory requirements for countries outside of North America,” she explains. “My days can involve anything from developing a test plan for a washer, working with suppliers on the requirements for a new component or designing an experiment to incorporate a new technology.”

Sherrette is also an unofficial ambassador for Trinidad and Tobago. “On a daily basis I’m interacting with individuals across the company and the world. The ability for cultural exchange is so vast. I’m pretty sure I’ve said “and Tobago” more times than I can count to help educate people that there are indeed two islands,” she chuckles.

Her journey is amazing, stories like hers are what motivate other young people to dream without geographical boundaries, and to pursue those dreams relentlessly. Her love for the Sciences was awakened while attending Holy Faith Convent, Couva. “In Form 4, I recognized I really enjoyed Physics and in particular, Magnetism and Electricity,” she reminisces. “I still remember Ms. Kamla Matthews’ lessons and labs as being instrumental in my passion for the topic. I always knew I’d become an engineer because I enjoyed solving complex problems. It took some time to figure out which type of engineering but I ultimately chose Electrical Engineering.”

While in Upper Six she took the SATs and applied for schools in the US and the UK. She got accepted to a few schools, but ultimately decided on Northeastern University (NU). Her life in another country started not too long after. She had to leave the comfort of her very close-knit family and her home country, in order to venture into something new and exciting. “Growing up, I was always surrounded by many family members and we always had an excuse to lime whether it be a birthday or just because it was

Friday,” she says. “They’re probably planning a lime right now. Three of our houses are actually next to each other without fences. We never needed to invite anyone else to a lime because there’d easily be at least ten people with our family alone.”

But when she went to Boston, she had to do things on her own. “The biggest adjustment was not having food cooked by ‘grama’ or mummy everyday. I was forced to learn to cook in order to keep a part of home with me. It took several phone calls and burning the sugar a few times for me to finally get my pelau in order but, I’m finally there,” she laughs.

After university, Sherrette was on her way to the NSBE (National Society of Black

Engineers) 2012 Annual Convention in Pittsburgh, when Whirlpool found her! “Whirlpool Corporation asked if I wanted to interview with them,” she recalls. “I was on my way to graduate school but decided to postpone attendance to pursue a unique opportunity.”

However, she admits, that at first, being one of two females and one of the youngest in her group was intimidating. She later recognized though, that when she spoke up in meetings, her ideas were remembered because she had a unique voice and brought a new perspective to the project. “Soon my colleagues valued the diversity I brought to the team and intimidation turned into encouragement,” she points out.

Nearly four years later (her work anniversary is in June), she lives in Southwest Michigan on the lake, and is a far cry from the little girl who traveled each morning for seven years, all the way to Port-of-Spain from San Fernando, to attend primary school at Trinity Junior Primary School.

She has had the opportunity to be trained by some of the best engineers in her field during an expat assignment in Germany, and outside of her day-to-day job, she works alongside others to encourage diversity in the engineering field. “I work closely with Whirlpool’s Diversity and Inclusion team to create programs to attract and maintain the diversity in our field and our company.” For the past few years, she has also led the Nqtional Society of Black Engineers’ recruiting team.

She wakes up each morning, “blessed”, as she describes it, to “work with a great team, create moments that matter for our customers and along the way, inspire generations to come.”