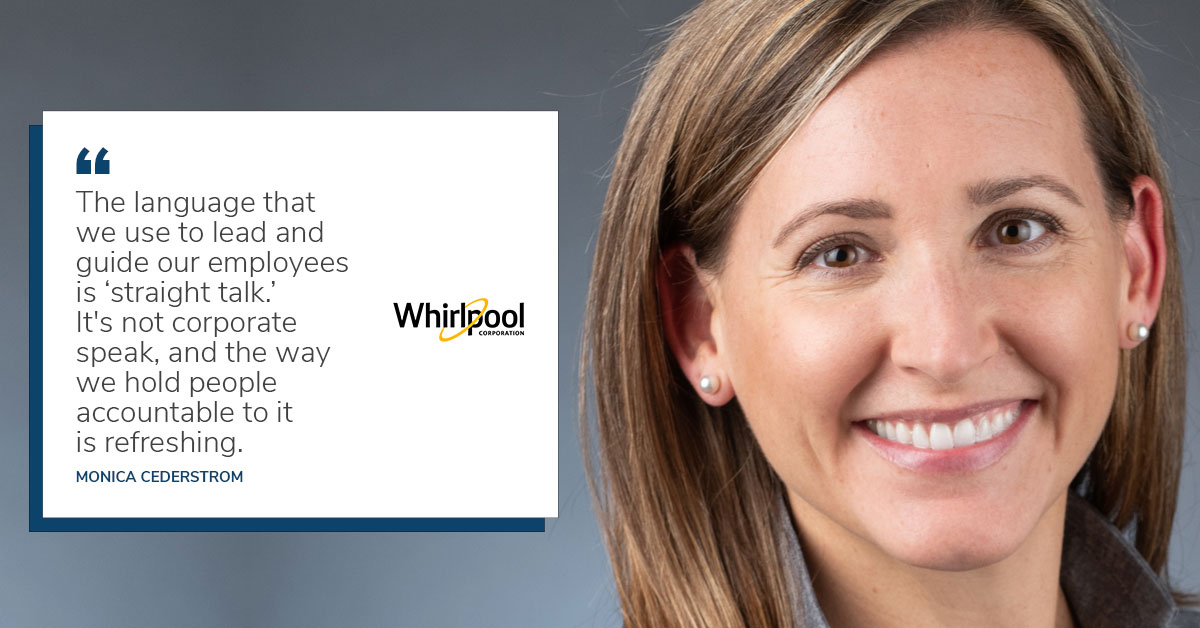 “I’ve been an HR professional my whole career,” said Whirlpool Corporation’s new Vice President of Human Resources, Monica Cederstrom, speaking on a Google Hangouts call from her home in Bay City, Michigan. Cederstrom came to Whirlpool in March after spending more than 15 years at another large, well-known Michigan corporation—Dow.

Joining the company at the beginning of the COVID-19 pandemic has made the onboarding experience an interesting one for Cederstrom.

“I had one week in person, meeting face-to-face with people, and ever since then, I’ve been working virtually. I didn’t spend my first 30 days onboarding and having introduction meetings in person like I would have before COVID. On top of joining a new company, because of the pandemic, I immediately had to jump in and join my new colleagues to decide how to make sure our people are safe during these unprecedented times.”

During this time of crisis, I saw leadership lead, and I saw humans being empathetic. I’ve seen team members help each other and pull together as One Whirlpool. All of those things spoke about a culture that to me was most important.

It was a challenging time to join a new company and begin a new position. The Whirlpool culture of openness and willingness to help was key.

“How we interact with other individuals in the workplace has been kind of flipped upside down now because of COVID,” she said. “We’re having to figure out new ways of communicating now that we aren’t in the physical workplace. Do people prefer phone calls, texts or emails to informally connect? Do they like an instant message through Gchat, or do I have to set up a Google Hangout meeting? These are all variables that employees across the globe at Whirlpool have been dealing with.”

Cederstrom said that the company’s leadership model and culture are some of the most immediate and impressive things she’s experienced. “During this time of crisis, I saw leadership lead, and I saw humans being empathetic. I’ve seen team members help each other and pull together as One Whirlpool. All of those things spoke about a culture that to me was most important.”

What also attracted Cederstrom to the position is Whirlpool Corp’s dedication to corporate social responsibility.

“I think back to the commitment we made recently with our racial equality pledge, where we are committing to bettering the lives of people in St. Joseph and Benton Harbor. A similarity between Whirlpool and Dow is that both companies are headquartered in small towns. A large employer in a small town has a very important role in the community. You need a company that’s responsible and has a purpose that’s beyond the products they make and generating revenue.”

She also said that these values and principles make Whirlpool attractive to new employees.

“The language that we use to lead and guide our employees is ‘straight talk.’ It’s not corporate speak, and the way we hold people accountable to it is refreshing. It’s a big differentiator as an employer. It’s also something that will continue to help us with our ability to attract, retain and engage employees.”