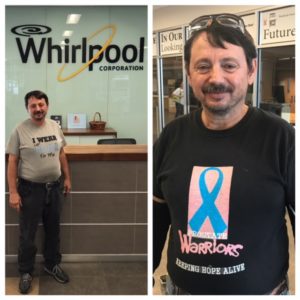 Whirlpool Corporation employee Warren Laier doesn’t call himself a cancer survivor. He is a cancer warrior.

In 2014, a routine exam at the VA clinic in Chattanooga revealed the U.S. Army veteran had stage three prostate cancer. There was no history of the disease in his family, but a blood check showed elevated levels of PSA. The acronym stands for prostate-specific antigen, a protein produced by cells from the prostate gland. Men with prostate cancer often have higher levels of PSA in their blood, although cancer is a possibility at any level.

Warren hopes to teach his community and his co-workers more about the disease. He proudly wears shirts to work that read, “I Wear Light Blue for Me” and “Prostate Warriors, Keeping Hope Alive.”

“The horrible things is that some people laugh at you or treat you differently when you try to encourage them to get tested (for prostate cancer),” Warren says.

Warren admits that he and his wife, Diane, were scared when doctors diagnosed him with prostate cancer.

He pauses and smiles when he talks about the unconditional support and love she has shown him through the most difficult time of their lives.

“When we learned of the side-effects,” he says, “Diane’s response was, ‘I’d rather have you here and alive…’”

Despite the struggles, Warren and his family are grateful they opted for his surgery to completely remove the prostate. The other treatment possibility was radiation and chemotherapy.

Warren has faith that one day he will fulfill his quest–to create an awareness of the disease that could have quietly claimed his life, and to educate men on the process of determining whether they could have prostate cancer. He hopes to start a local support group for men and their families who’ve taken the same journey as him and Diane.

“It begins with a simple blood test and if the test comes back with elevated levels of PSA, then it’s a quick examination–nothing to be ashamed of. Those few seconds in the doctor’s office could save your life.”

Warren is a Prostate Cancer Foundation advocate, supporting a new national program that aims to eradicate prostate cancer over the next five years. The crowdfunding effort is called the Many vs. Cancer Initiative.

For more information about Many vs. Cancer, visit www.manyvscancer.org, or go to www.pcf.org.