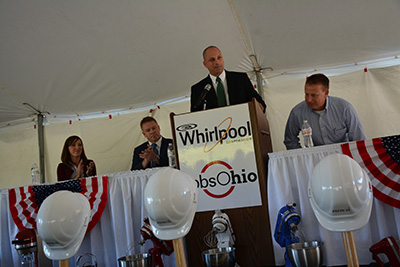 The project — which will nearly double the FDC from 327,000 square feet to approximately 650,000 — builds upon Whirlpool Corporation’s commitment to American manufacturing and reinforces Greenville as the global hub of the company’s small appliances business.

“This groundbreaking today is a testament both to the success of our global KitchenAid business as well as our commitment to domestic operations in the U.S. and Ohio,” said Ken Hossler, Plant Lead at the Greenville FDC. “We’re continuing to invest in Ohio due to the skilled and talented workforce here, and are looking forward to this expansion’s role in our continued growth.”

Today’s groundbreaking follows Whirlpool Corporation’s $40 million investment in its Greenville, Ohio manufacturing plant — part of a larger $80 million project to expand facilities across Ohio, that the company announced in May.

The FDC’s expansion — which is scheduled to be completed by March, 2017 — will stand adjacent to the current facility in Greenville.

Whirlpool Corporation Additional Information
This document contains forward-looking statements regarding facility expansion and capital expenditure expectations. Actual events or results may differ materially from those statements as a result a many factors, including that the facility’s expansion may be delayed. For information about the factors that could cause such differences, please refer to our Annual Report on Form 10-K for the year ended December 31, 2015, as updated by subsequent periodic reports, including the information set forth under the caption “Risk Factors.”