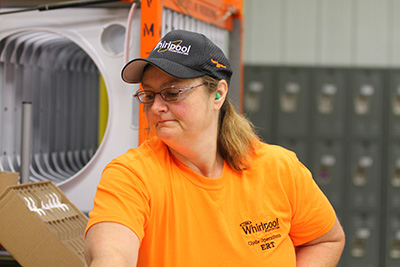 Today Whirlpool Corporation filed an antidumping petition with the U.S. Department of Commerce and the U.S. International Trade Commission to stop Samsung and LG’s dumping of washers into the United States. The petition outlines a long-term, repeated pattern of pricing below cost by Samsung and LG that is injuring American washer manufacturers and threatening American manufacturing jobs.

“Simply put, beginning in 2013, Samsung and LG replaced their dumped washers from Korea and Mexico with dumped washers from China,” said Marc Bitzer, president and chief operating officer for Whirlpool Corporation. “Since then, Samsung and LG have blatantly ignored a previous U.S. government order by continuing to dump washers into the United States. At Whirlpool, we know that open, rules-based trade ensures the highest level of innovation and choice for consumers. Our ability to innovate, invest and continue to manufacture here in the U.S. is undermined when foreign competitors willfully defy U.S. government rulings. We have continuously monitored this situation during the past several years and have spent the past several months preparing this petition as the next step in an ongoing effort to prevent this serial dumping.”

Whirlpool Corp. filed this petition seeking enforcement of United States and international trade laws. Enforcing trade rules will level the playing field for the U.S. appliance manufacturers. This includes Whirlpool Corporation’s 22,000 employees across the U.S. – which encompass 15,000 manufacturing workers located in nine plants across the country.

Background about Prior Case
In 2013, the U.S. Government approved trade remedies covering dumped and subsidized washer imports produced by Samsung and LG in South Korea and Mexico. Rather than complying with the order, Samsung and LG instead decided to evade these remedies by moving their production operations to China. To learn more about the previous case, visit our corporate website at WhirlpoolCorp.com/fair-trade.

Whirlpool Corp. in the U.S.
More than 80 percent of the products sold by Whirlpool Corp. in the U.S. are assembled in the U.S. The company’s Clyde, Ohio, facility is the world’s largest washer manufacturing facility. The Clyde, Ohio facility not only meets America’s washers needs but also exports 10 percent of the washers it makes to meet the needs of families around the world. This investment in Ohio includes 10,000 employees, $1.6 billion in supply chain spending, and $7.4 billion in manufacturing spending.

Whirlpool Corp. in China
Whirlpool Corp. has a two-decade history meeting the needs of Chinese consumers through significant manufacturing and research and development investments in the country. The company has more than 20,000 employees in Beijing, Shanghai, Shandong, Zhejiang, Guangdong and Anhui provinces. China is an important growth market for Whirlpool Corp., and the company is quickly expanding its investment in the country.

About Whirlpool Corporation
Whirlpool Corporation (NYSE: WHR) is the number one major appliance manufacturer in the world, with approximately $20 billion in annual sales, 100,000 employees and 70 manufacturing and technology research centers throughout the world in 2014. The company markets Whirlpool, KitchenAid, Maytag, Consul, Brastemp, Amana, Bauknecht, Jenn-Air, Indesit and other major brand names in more than 170 countries. Additional information about the company can be found at Whirlpool Corp.com, or on Twitter at @WhirlpoolCorp.

Whirlpool Additional Information
Certain statements in this press release relating to the antidumping petition and the expected timing for resolution constitute “forward-looking statements” within the meaning of the federal securities laws. These statements reflect management’s current expectations regarding future events and speak only as of the date of this press release. Forward-looking statements involve significant risks and uncertainties, should not be read as guarantees of future performance and will not necessarily be accurate indications of whether or not, or the times at or by which, events will occur. Actual performance may differ materially from that expressed or implied in such statements. Important factors that could cause actual results to differ materially from these expectations include, among other things, the risk that the timing for resolution of these matters may be significantly delayed. In addition to these risks, reference should also be made to the factors discussed under “Risk Factors” in Whirlpool Corporation’s periodic filings with the Securities and Exchange Commission. Although the forward-looking statements contained in this press release are based upon what are believed to be reasonable assumptions, investors cannot be assured that actual results will be consistent with these forward-looking statements, and the differences may be material. These forward-looking statements are made as of the date of this press release and, except as expressly required by applicable law, Whirlpool Corporation assumes no obligation to update or revise them to reflect new events or circumstances.