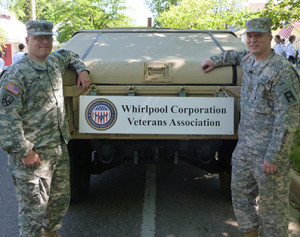 Each year Whirlpool Corporation joins Americans to honor our veterans for their service and their sacrifice. On Veterans Day, we offer our utmost gratitude and respect. For these men and women, while service is an extremely honorable part of their story, those stories don’t end when a service member returns home. Whirlpool Corporation values America’s veterans and believes the skills they receive through military training are critical to our workforce. For that reason, the Whirlpool Veterans Association (WVA) tirelessly advocates veteran recruiting in partnership with Orion International and developed a mentorship program to help new hires with military backgrounds.

As evidence of its commitment to veterans, the company is being recognized as one of the 2015 Top Military Friendly® Employers by Victory Media Inc., a veteran owned company and ratings entity. Additional recognitions include the Michigan Veteran’s Affairs Agency’s 2014 Bronze Level Award for commitment to military veteran recruitment, training and retention and both the 2014 Pro Patria Award and recognition as a top veteran friendly employer among large companies by the Department of Defense’s Employer Support of the Guard and Reserve.

“As more and more veterans return to the workforce, it’s very important that Whirlpool Corporation and other companies with similar values acknowledge the talents they have to offer,” said  Lynanne Kunkel, vice president of Global Talent Development and Human Resources at Whirlpool Corporation. “We’re proud to be recognized as a military friendly employer. Whirlpool Corporation was established 103 years ago today and throughout our history, from shifting production to aid the war effort in 1942, to our Veterans Association today, we have supported the service of our men and women in uniform.  The skills these men and women learn in quick decision-making, teamwork and leadership are vital to creating a strong and talented workforce representative of the values the United States is founded on.”

Through on-boarding support for veterans and their families, Whirlpool ensures that the transition from military service to civilian life isn’t shouldered alone. As part of the company’s mentoring program, veterans and mentors help new hires make the transition to new positions and progress to executive leadership. Members support and recognize veteran colleagues, give back through service and support community events.

In 2013, the Whirlpool Corporation Veterans Association became the official appliance sponsor of Homes for Our Troops (HFOT), a U.S. non-profit organization that assists veterans who were severely injured in combat. Since 2004, HFOT has handed over the keys for nearly 140 mortgage-free home build projects. For the next three years, new homes will include a full suite of new Whirlpool major appliances and KitchenAid countertop appliances.