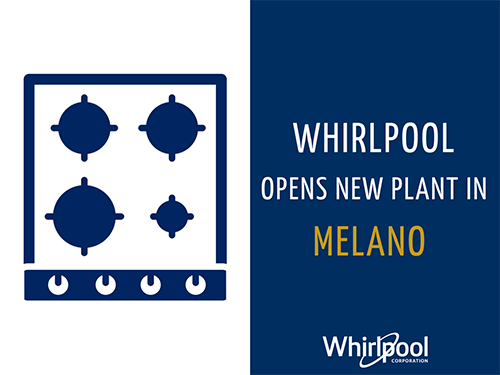 The industrial site is now the main hob producer in the EMEA region. 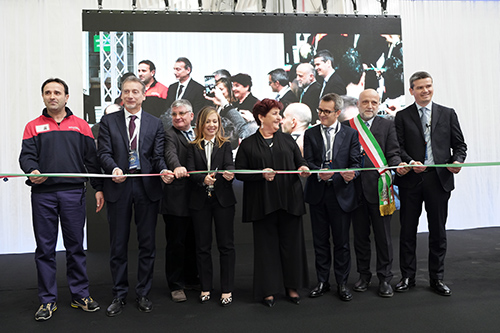 The 14 assembly lines have reached full production capacity, with two million units a year serving all the markets in the EMEA area. Melano has been completely renewed as an industrial site: with an area of 264,000 m2, of which over 34,000 m2 covered, its excellence is based on cutting-edge technologies, structures and processes.

The Melano facility has over 700 employees, the powerhouse of the factory and a major resource for the company. It was for them, last December, that Whirlpool stopped the production lines for three days to organize an internal workshop (also involving local government) focusing on the winning mindset that the company shares with the territory in which it operates.

The commitments undertaken in July 2015 with central and regional governments and the trade unions within the framework of the Industrial Plan have materialized: over 220 million euros have been invested in processes, products and research & development out of a total of over 500 million to be spent by the end of 2018. 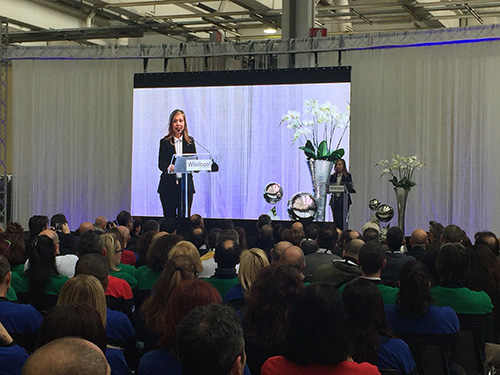 “I’m proud to be in Melano on a day that means much more than a new start and to be celebrating this important inauguration with Vice-Minister Bellanova,” said Esther Berrozpe Galindo, President, Whirlpool EMEA and Vice-President, Whirlpool Corporation. “It’s an endorsement of the course Whirlpool decided to embark on together with the people in this territory, the Fabriano area and the rest of the Marche region, people put to such difficult tests over the last year. It’s also a commitment to Italy and a sharing of responsibility with the government of this country, in which Whirlpool believes and where it has decided to invest in the growth of its business and that of the Italian economy as a whole.”

“For me, today is also a clear sign of confidence in the economic and industrial recovery for the country, and in particular for this region” said Economic Development Vice-Minister Teresa Bellanova. “Confidence shown by the Renzi administration a little under two years ago, with the signing at Palazzo Chigi of the framework agreement that provided support for Whirlpool and its employees in the reorganization of its manufacturing facilities. Through hard work and collaboration on the part of everyone, a territory that has always specialized in home appliances and has for decades been a center of Made in Italy excellence is once again highly attractive for a multinational like Whirlpool. A major investment not only in economic terms but above all in terms of hope, passion, talent, of which we must be proud.” 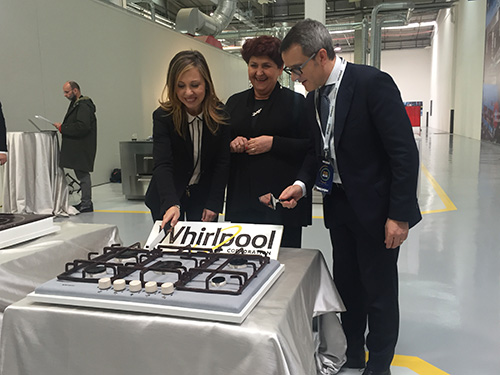 “We appreciate Whirlpool’s commitment to and promotion of this territory’s manufacturing vocation. In this inauguration we see a long-term project, a factory focused on a future in which new technologies interact with a human capital that is increasingly professional,” commented Luca Ceriscioli, President, Regione Marche. “A splendid signal for young people too. The challenge for Whirlpool is also, above all a challenge for our regional administration to provide more modern infrastructure, upgrade transport and facilitate the formation of an ecosystem capable of satisfying the expectations of an increasingly internationalized world.”

“This a great day for Fabriano,” said Mayor Giancarlo Sagramola, “in that we see the confirmation of the commitments undertaken by Whirlpool with the building of EMEA’s new hobs production hub at Melano. A sign of hope in a land ravaged by crisis and earthquakes but not disheartened. Our City has a history of work behind it: the people of Fabriano will go on renewing this through their efforts, as they always have done”.

“We’re all ambassadors for this territory with its winning DNA, a land to which we wish to express our ever growing pride in belonging to a great, international enterprise that continually invests in innovation. Here in Melano we’ve already allocated over 14 million euros, to be followed by another nine million in the next two years,” commented Davide Castiglioni, Managing Director Italia and Vice-President Industrial Operations, Whirlpool EMEA. “Melano is the result of the re-organization of our six industrial sites in Italy, each of which with its own specific mission, fruit of the commitments under the Italian Industrial Plan signed in July 2015.” 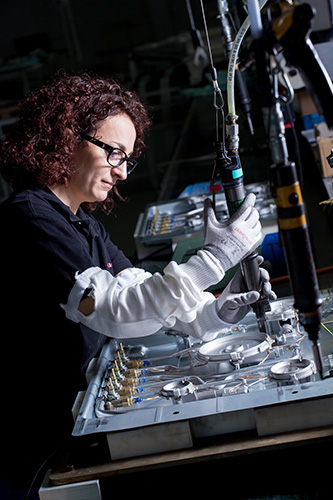 Whirlpool has always worked to promote a model of social commitment and sustainable development to help build a better community in the places where it operates. Being part of a community also means being close to people when they’re in difficulty. Whirlpool was there for those hit by the recent wave of earthquakes and did its bit towards the rescue operations organized by the Italian Red Cross and Civil Protection services.

At Melano, as in all Whirlpool production facilities and sites worldwide, respect for the environment goes hand in hand with commitment to workplace health and safety. All the initiatives adopted are geared to reducing the accident rate to zero and safeguarding the environment by cultivating the proper mindset and culture amongst all employees. The facility itself has obtained ISO 9001, ISO 14001 and OHSAS 18001 certifications for the quality and efficiency of its environmental, health and safety management systems respectively.