Aiming for the Stars, Whirlpool Corporation’s Return to the U.S. Space Program 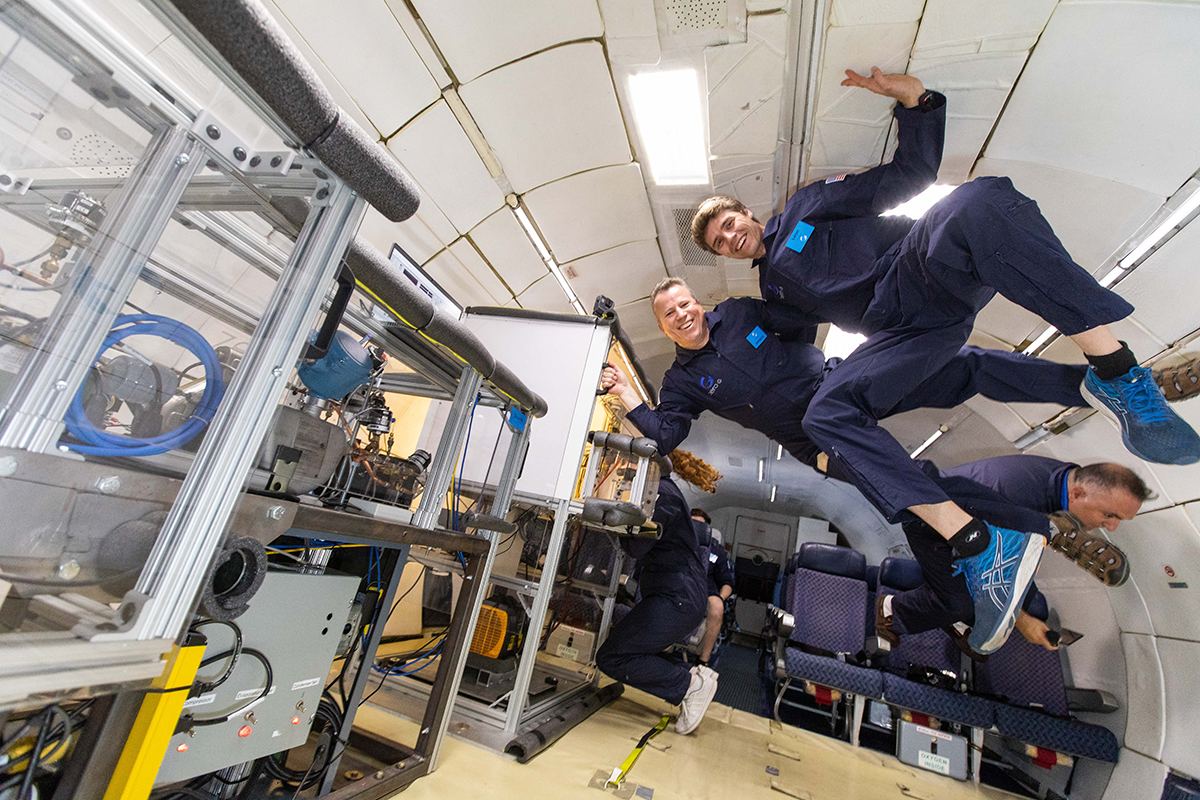 A single, very significant event that would change the course of humankind happened on October 4, 1957, when a beach ball sized satellite named “Sputnik” was launched into space by the Soviet Union.

Taking only about an hour and a half to make a complete orbit around the Earth, this launch of the world’s first artificial satellite marked the start of a “space race” between the United States and the U.S.S.R. that would eventually lead to the development of the Apollo space program, and the United States making that very first dusty footprint on the surface of the moon.

But before the momentous landing on the moon on July 20, 1969, there were a lot of logistical problems that NASA had to deal with, not only with how the astronauts were going to get there, but how they were going to eat, sleep and perform all of the other functions that necessitate daily human life. That’s when the U.S. government turned to Whirlpool Corporation to create the world’s first “space kitchen” and “space food.”

The company was tasked with developing a system that would provide all the food and beverages needed to support three astronauts for a 14-day mission. To address this challenge, Whirlpool Corporation devised a full kitchen that included a miniature thermoelectric refrigerator, freezer, three-cavity oven, self-heated water system, along with storage space for food, and disposal units for both dry and wet waste.

Because of the zero-gravity conditions, engineers also had to design a food delivery system that consisted of tubes that injected the food into the astronauts’ mouths. The program was a success, and Whirlpool Corporation completed 300 separate space-related contracts between 1957 and 1973 for not only the Apollo space missions, but also the Gemini missions and Skylab.

This tradition of working with the U.S. space program continues today, with Whirlpool Corp. joining a team of engineers from Purdue University and compressor manufacturer Air Squared to once again pioneer another innovative appliance to be used in space. The latest project is a specialized refrigerator designed to operate in zero gravity for future space missions, including a possible Mars mission. 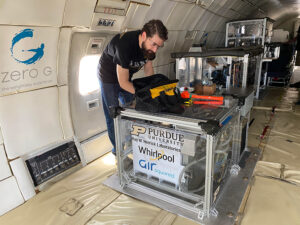 “Air Squared approached Whirlpool Corporation to be a Phase II-E investor on an oil-free refrigerator for flight testing. Air Squared has been developing oil-free compressors for 30 years, which is a necessary part of the design due to the weightless conditions that the refrigerator would experience in outer space,” said Alberto Gomes, who headed up a team of engineers from Whirlpool Corporation on the project.

The most recent phase involved testing the refrigerator prototype in zero gravity. This was done by sending a group of engineers and the fridge for a series of flights on an aircraft operated by Zero Gravity Corporation in Fort Lauderdale, Florida that simulates the weightlessness of outer space by making multiple parabolic maneuvers. Testing on the refrigerator was done during the flight by teams from Air Squared, Purdue, and Whirlpool Corporation in early May. Data from these flights will be used to make improvements to the microwave-sized refrigerator prototype.

“The nose goes up to about a 45 degree angle, and you’re basically pushing 1.8 Gs until the plane begins to cross over, and then you go into zero G,” said Abhay Naik, one of Whirlpool Corporation’s engineers who actually participated in the flights. “A lot of our current refrigerator cycles are dependent on gravity to some extent, so this allowed us to see how the systems were behaving without gravity, and with increased gravity.”

Whirlpool Corporation engineer Kevin Zhang also took part in the actual test flights. “It was a lot of fun, but also a very busy week because we were constantly in the hangar making fine adjustments and tuning the system whenever we got a chance. There were meetings and discussions in between; deciding what we wanted to learn each day and doing a lot of quick, reactive planning for the next test. It was amazing to be able to experience zero gravity, and that was definitely something I didn’t think I would experience while working at Whirlpool.”

The goal was to collect as much data as possible, so the team could improve and enhance the design of the unit.

“All of the data we had from the Zero G flights looks very positive, and we feel good about the results,” said Gomes. “We’re hoping that the next step is to test the unit on the International Space Station.”

The global team of engineers from multiple regions was able to successfully tackle the project that could easily have taken a year and complete it in just a few months. “We were able to execute this project very fast because we all worked together really well already,” said Naik, “and we were able to use the learnings that we had gained from some of those other projects.”

Employee Sanket Phalak collaborated with the team remotely from Whirlpool India. “I worked with designers here and transferred the results of that work to the larger team. Because we had to design this refrigerator to fit in an ISS (International Space Station) rack, it only had access to troubleshoot issues while in flight from the front, unlike the Earth-based units we normally design, so that was part of the challenge we had to overcome.”

The team from Whirlpool learned a lot by working on the project—about working on an appliance for space—but also about shifting priorities to get the project done in a short amount of time, said Subrata Shannigrahi, another one of the project engineers. “It was a bit of a learning curve for all of us at first,” he said. “But even though we all had our regular responsibilities on top of working on this project, we were able to keep the work flowing by sharing responsibilities. If one person was tied up, someone else would step up and cover for him. It was a lot of work, but it was enjoyable because it was so different from working on a terrestrial refrigerator.”

Fellow engineer Rahul Chhajed agreed. “I enjoyed the challenge. We kind of had to start by throwing out much of what we already knew about designing a refrigerator and start from scratch,” he said. “When we design refrigerators for use here on Earth, we take for granted that the orientation of the refrigerator components will remain stable and that gravity will be normal.  We obviously did not have that in this case, so we designed a simple system that would be robust and stable for installation into a rack in outer space.”

Working for an appliance manufacturer, these engineers could have never dreamed they would be collaborating on a project for NASA. “When my manager told me we would be working on this project, I was very excited,” said fellow Whirlpool team member Sanjesh Pathak. “There were so many different things we had to think about—not only how to make it work in zero gravity, but how do we handle liquid and air flow, how do we handle defrosting, and what are the complexities associated with such small space constraints?”

All three principal partners had key roles in the project. “Air Squared brought the components, Purdue did a deep dive into the physics of space flight, and we provided our expertise in refrigeration,” said Gomes. “It was a very collaborative process.”

The next stage for the project could include sending the refrigerator to the International Space Station for further testing.