LaShon, Jerry and their girls establish a new life and stability through Habitat homeownership in Findlay, Ohio 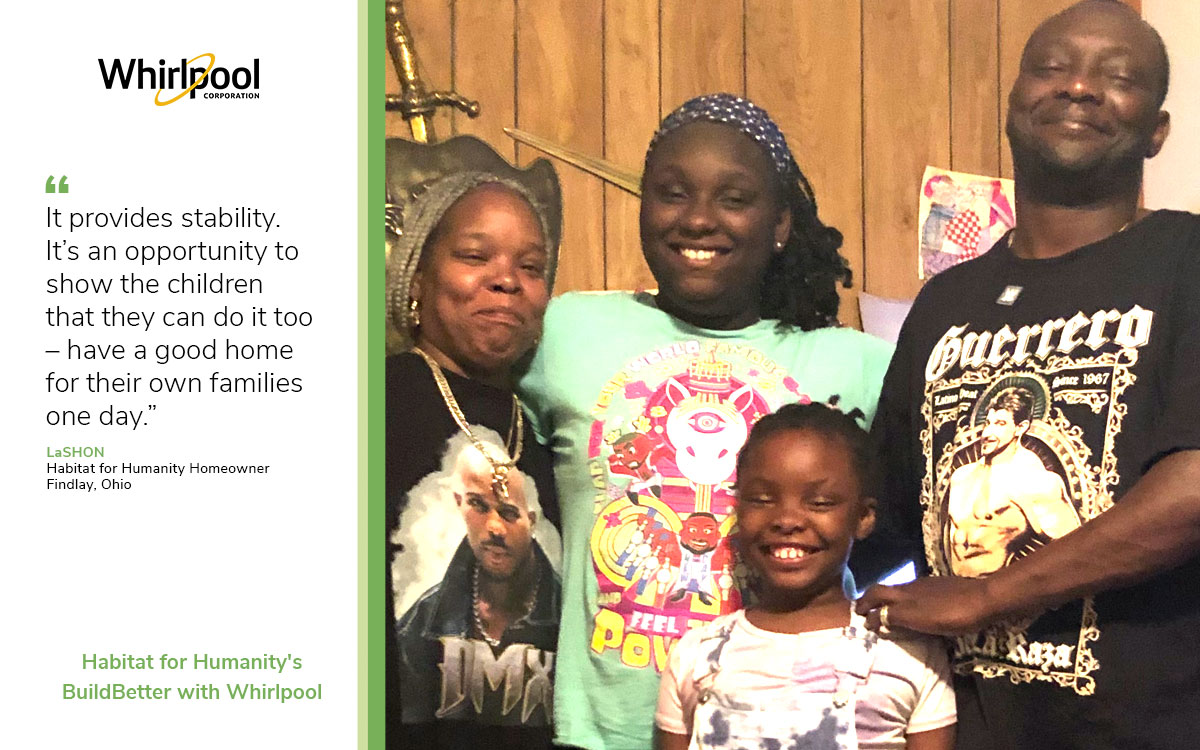 Staring into the face of increasing challenges, LaShon, husband Jerry and their daughters, packed up their life with all of their belongings in Detroit, Michigan and relocated to Findlay, Ohio in 2012, seeking greater opportunity. Their hope was that this new beginning would promise their girls, Jaila, age 14, and J’LaShae, age 9, a chance to flourish.

“The Findlay City school system is one of those better opportunities, and not only are Jerry and I happy with this school system, but our girls are thriving,” LaShon said.

Despite the newness of an unfamiliar location, life really seemed to fall into place with this fresh start. However, one very important thing was still missing: the stability and self-reliance that comes with homeownership. As rising costs of rent continued to soar across the nation, LaShon’s family dreamed of owning a home and establishing secure roots in a stable neighborhood.

It provides stability. It’s an opportunity to show the children that they can do it too — have a good home for their own families one day.”

“We had not heard of Habitat for Humanity until we moved to Findlay and became friends with our neighbor across the street,” LaShon says. “She told me about the program, so I called the number and signed up. We were tired of renting. We wanted to own our own home and wanted to show our kids that they could have a different, better life.”

LaShon and Jerry applied to the Habitat program in 2019 and following hundreds of hours of their own “sweat equity” alongside volunteers and Habitat for Humanity staff, they moved into their new home last year. She says her new home is a blessing.

“It provides stability. It’s an opportunity to show the children that they can do it too — have a good home for their own families one day.”

The family’s new home was built as part of Habitat for Humanity’s BuildBetter with Whirlpool initiative, an expansion of Habitat’s existing BuildBetter initiative that is building more than 250 climate-resilient and energy-efficient homes over a three year period in partnership with hundreds of families in need of affordable housing.

The family’s new energy-efficient three-bedroom home has a tankless hot water system and 2-by-6-inch stud walls for additional insulation, which lowers monthly heating and cooling costs. The home is air-sealed and insulated, and includes a continuous running exhaust fan in the bathroom. This system improves indoor air quality by removing moisture, odors and pollutants from their well-sealed and insulated home.

Findlay is located in a high-wind area, but the house has a fortified roof system using zip panels that are taped, along with high-wind rated shingles. The family also received an energy-efficient refrigerator and a range, which are donated by Whirlpool Corp. to every Habitat-built home in the U.S. and Canada. A Whirlpool brand microwave and dishwasher were also donated to this home.

“Whirlpool has really helped us out by providing those appliances. We didn’t have to buy new appliances or bring our old ones from our apartment,” says LaShon.”

She is also very grateful for Habitat’s help in building a new home for her family. “I want to thank the Habitat family for all they’ve done for us.”