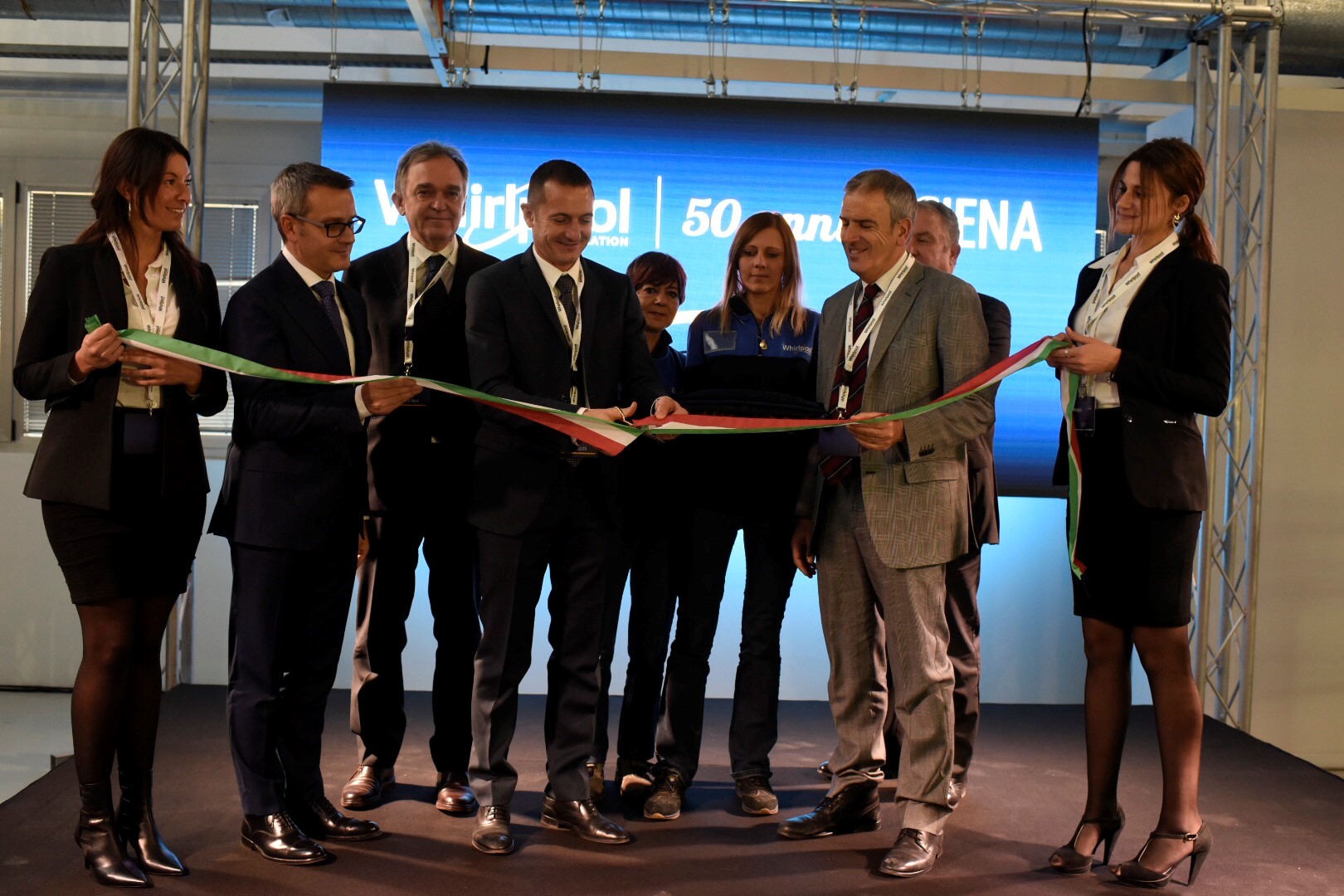 The new line is the pride of the Siena plant and will turn out over 15,000 KitchenAid Iconic Fridges for the EMEA market. The line also has global prospects.

“Our 50 years at the Siena facility are a reflection of the excellent work done to date and a stimulus to continue growing not only for the benefit of the company but the whole community that hosts us,” commented Davide Castiglioni, Vice President Industrial Operations Whirlpool EMEA. “Siena and Tuscany are a strategic territory for us, rich in talent and resources. Together we can go on successfully rising to the challenges of the future.”

In its current configuration, the Tuscan site is the result of an upgrading process implemented under the Italy Industrial Plan signed by Whirlpool in July 2015. The Siena facility, where over 400 people turn out over 400,000 units a year, has been assigned the mission of producing horizontal freezers, ice machines and single-door fridges for the entire EMEA region and other global markets.

“The Siena facility had to face various difficulties,” recalled mayor Bruno Valentini, “before coming under the wing of a big multinational, rendering it susceptible, however, to brusque changes in industrial and employment strategies. Its main strength is the high quality and efficiency of its production processes, which explains why other products, in addition to the traditional ones, have been moved to Siena to fully exploit the facility’s capacity. The dependability of its Siena labour force fully deserves Whirlpool’s investments here, and I hope that solidarity contracts and intermittent work are now a thing of the past, so that this half century anniversary in our city can be celebrated as it should be”.

“I’m happy to be taking part,” said Regione Toscana president Enrico Rossi, “in this 50-year celebration of Whirlpool’s facility in Siena and in the inauguration of the new production line for top of the range KitchenAid fridges. This factory is a powerhouse in south Tuscany, a centre of specialization we don’t intend to give up and which we’ve had to defend in recent years by means of a solidarity agreement under the 2011 protocol of intent safeguarding local jobs. Despite the economic crisis, this site was not written off by the restructuring that followed Indesit’s integration with Whirlpool. This result is down to the foresight of its local and national management, as well as to the quality of the facility’s workforce, the reactivity of our regional administration and the value added delivered by Whirlpool’s R&D processes on the integrated supply chain at local level ”

Whirlpool’s operations in Tuscany have a significant impact on the local economy. The Company generates business for local industry worth over 7 billion euros a year, a figure set to grow by nearly 50% thanks to the launch of the new KitchenAid production platform officially celebrated today.

“We’re proud to have launched the Iconic Fridge – one of the hero products of the Company’s Premium brand – here in Siena where we can count on a longstanding tradition of craft and care over details. The KitchenAid brand’s first “masterpiece” in the freestanding segment is the expression of an iconic, timeless design that’s the trademark of our Premium brand,” explained Novella Sardos Albertini, Head of Brand and Communication EMEA, KitchenAid SDA & MDA.

Throughout its 50 years in Tuscany the facility has been an increasingly important economic and social player, thanks in part to close co-operation with no-profit associations and other socially oriented partnerships with universities, healthcare companies and schools, involving both product donations and celebrations and factory open-days.

This afternoon’s institutional visit is also an opportunity to give an Italian prelaunch of Whirlpool EMEA’s new communication campaign, #PlacesthatMatter, focusing on the faces and stories of people who live and work in the communities where the Company operates. It provides real photographic reportage of “places that count and recount”, from Russia to South Africa, places where the Company’s products are made: its words and images will be featured over the coming months in an interactive exhibition touring the various territories taking part in the initiative.